2.5 SoundWire Server is the application you need to connect your PC to the Android application SoundWire and listen to music from your PC via streaming
8/10 (42 Votes)
Download 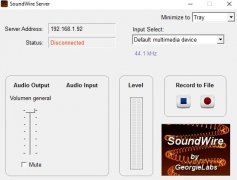 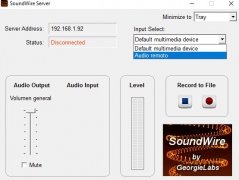 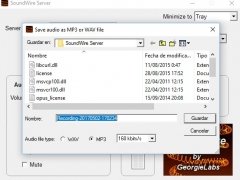 You might just have a music collection in MP3 format that you think is better than anything else you can find on Spotify and that's why you're not into online music streaming. But if you want to listen to it on your smartphone, you'll need to download it from somewhere, unless you use a program of the likes of SoundWire.

This app is capable of playing on your Android whatever you play on your computer. However, if you want to make the APK of this app work, you'll also need to install the PC tool that goes by the name of SoundWire Server. It's a must.

How to listen to your PC's music on your Android

You've also got to remember something else: this app doesn't do miracles, so your smartphone and PC will have to be on the same WiFi network. In any case, with this server, you won't be able to access a wide range of functions. Basically, because it only offers you the chance to broadcast and stop the broadcast and that's it, as the rest of functions that have to do with advanced audio settings are available from within the mobile version. So, in this program for Windows, you'll find the following:

As we said above, this Windows version is compatible with the Android app (which, in turn, is compatible with versions for Linux and Raspberry Pi). For the time being, there's no development available for iPhone, so if you want to send your music via streaming to an iOS device you'll have to search for other alternatives.

The best media center for PC and Smart TV