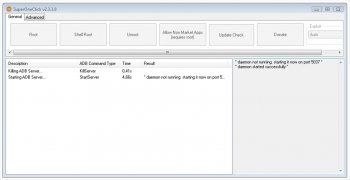 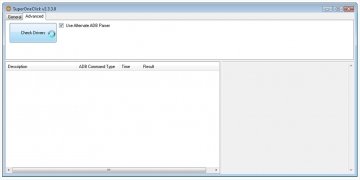 Phones equipped with Android operating system are trendy and many users are searching for applications that can be used for their administration and management. SuperOneClick is a software application that will allow you to become the administrator of your Android device, in such a way that you'll be able to carry out all kinds of modifications.

Super One Click will transform you into the sole administrator of your Android device with the advantages that this provides; absolute freedom to install all kinds of applications or to customize the device with all kinds of ROMs.

There's a large amount of terminals that are compatible with SuperOneClick, as in the case of the Samsung i9000, Motorola Droid, Nexus One or Samsung Spice devices among others. SuperOneClick provides absolute control over them, even though in other cases you'll only be able to apply a level 1 'rooting', which requires the use of further software to carry out a subsequent process. That is the case with terminals like the Sprint EVO 4G (HTC Supersonic), Droid Incredible (HTC Incredible), HTC Desire GSM, HTC Aria or HTC Wildfire (HTC Buzz) among others.

Use at your own risk

SuperOneClick will offer you the key to the total management of your Android device, but you have to be careful: this type of program, may make you lose your product's guarantees or render them useless if not used properly, which we're very sure that you don't want to happen.