Score as many points as possible with Columns, the classic gem game now available for your PC. Create lines with the gems once you download Columns free
7/10 (35 Votes)
Download 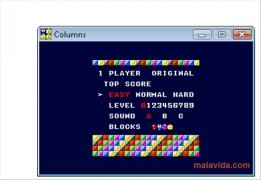 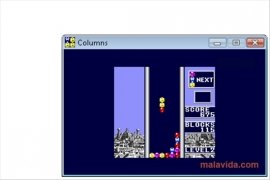 Columns brings the classic Sega game directly to your computer. There are games like the renowned Tetris that manage to revolutionize the way we play and create new concepts, and then there are those that just give them the proper turn of the screw. Columns Remake is one of those games that manages to have its own style being based on others.

The remake of a great classic

The game was created in 1989, also known as Jewels or Shapes and Columns, the truth is that its popularity increased so much that in 1990 Sega bought the rights to give it the shape and the format that we know today. Afterward being ported to multiple platforms, Columns is the most similar version that exists of the game that was played on the game consoles by the Japanese company.

How the game works is very simple, in a well similar to that of Tetris, rows of jewels fall (quicker as you advance in level) and you have to join gems of the same color and design. If you press down, the will fall quicker and if you press up they will change position to allow you to order them as you like most. The intention of the game is to join three pieces or more that are identical in a straight vertical, horizontal or diagonal line.

As with the Russian game, Columns ends when the well fills up with gems, and there's no possible combination. Thus, the longer and the more gems that you manage to gather, the higher the score will be.

A 3D Tetris on your PC

Enjoy a different sort of puzzle game thanks to numbers

Solve all the challenges that this great game poses