4.1.0 Avoid loss and problems with your controllers. Double Driver will allow you to create backup copies of all your drivers. Download Driver free on your PC
8/10 (13 Votes)
Download 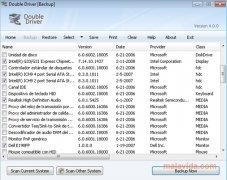 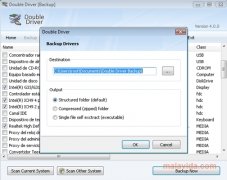 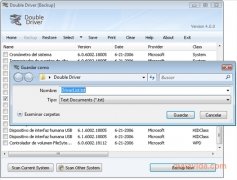 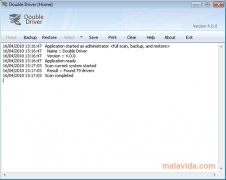 One of the major headaches that the majority of computer users have ever had to face is the lack of drivers, or controllers, for a specific device. In general, formatting a computer is an easy task until one of its components decides not to work as it should. That is why, when we find the proper drivers and the exact configuration, the best thing we can do is use Double Driver to create a backup.

Make a backup of all your drivers

Once Double Driver has been launched, it will show us all the drivers that are installed on our system and specifically mark those that aren't installed by default with Windows so that it's much easier for us to find them. Once this has been done, it allows the user to store all of them in a backup file that we'll be able to configure as a simple tree with folders with the drivers inside it, in a ZIP or an EXE file to install them directly.

The information that Double Driver compiles is relatively extensive, making it very useful for system administrators and technicians that need to know certain specific data, that is why it includes the option to save the list of drivers as a TXT file.

Antony Peel
Boozet Freeware
Over a year ago
More than a year ago
2.1 MB

Scan your computer and update all the drivers automatically

Application to update the drivers on your operating system