Working with ISO files required that you burnt them until you had the chance to download Furius ISO Mount free on your computer, a complete file virtualizer 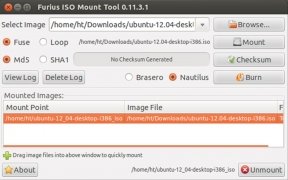 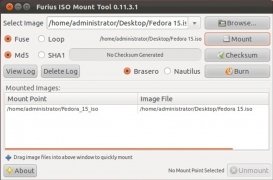 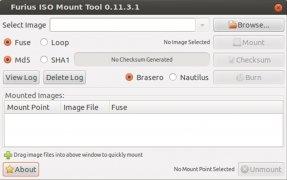 Furius ISO Mount responds to the need of using a CD image downloaded from the Internet without having to burn it. Nowadays it is very normal to find exact rips of many discs (whether software, music, films,...) and in general to be able to use them it is necessary to burn them on a CD/DVD. But thanks to programs like this, now we can use disc images virtually.

Use disc images without recording them.

Furius ISO Mount is one of the best options available

Even when there are simpler virtualizers, Furius ISO Mount is considered one of the most advanced. It's capable of recognizing ISO, IMG, BIN, MDF and NRG images as well as allowing us to create a mount point in the /home folder. On the other hand, it stores a useful history of 10 images as well as allowing us to mount various ISO files at the same time.

Among the features it doesn't leave out security, it's capable of generating MD5 and SHA1 checksums, the most used verification algorithms.

All in all, if you want a software application that allows you to use virtual optical units, Furius ISO Mount is a simple, but powerful choice to install on your Linux.