Download free GB WhatsApp 2023 APK developed by HeyMods. Upgrade to the latest version of one of the best MODs available for WhatsApp with extra features 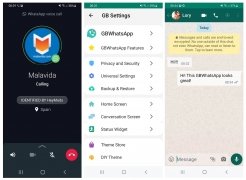 The MOD to have two WhatsApp accounts on your phone

GBWhatsApp is one of the best MODs for WhatsApp

GB WhatsApp is one of the best WhatsApp MODs on the market, a modded version of the world's most popular instant messaging app. The main objective of this MOD is to improve the features and functions of the original app, especially in terms of interface customization and user privacy.

What is GBWhatsApp and what is it for?

WhatsApp GB is a MOD developed by a third party and based on the original WhatsApp source code. It is a totally free service that brings together the best of the official application and other additional features and functionalities not yet available in WhatsApp.

With GB WhatsApp, you will enjoy many customization options, enhanced privacy features to prevent anyone from controlling your use of the application, and the ability to remove many of the current limitations of WhatsApp. Everything without giving up the latest features of your favorite messaging app.

GBWhatsApp's main goal is to add new features to WhatsApp and improve existing ones. By downloading its APK, we will find the following features:

Differences between GB WhatsApp and WhatsApp Plus, which is better?

GBWhatsApp and WhatsApp Plus are two very similar applications, with almost no differences between them. This is because they are developed and maintained by the same group of people, HeyMods.

If we make a comparison between GBWhatsApp and WhatsApp Plus comparing one by one the menus available in each of the apps, they are virtually the same. And both applications weigh the same MBs, are updated at the same time, and have the same version number. At first glance, the only differences in functionality are limited to the details that the developer wants to emphasize individually in an attempt to create a unique identity for each MOD.

Now, the big difference between them is that WhatsApp Plus shares the same package name as WhatsApp (therefore they cannot coexist on the same phone), while GB WhatsApp has been named com.gbwhatsapp, so it can be installed and work simultaneously with WhatsApp, letting us use two accounts at the same time in the same device.

So, if we have to choose, we will say that GBWhatsApp is better than WhatsApp Plus.

Which is the official GBWhatsApp?

First of all, there is no official GBWhatsApp. The only official app is the WhatsApp Messenger developed by Meta that you can download from the Play Store, from Malavida, or even from its official website. WhatsApp GB is a MOD and therefore not official.

It is difficult to agree on who is the original author of this modified app. Throughout history, the most successful instances have been developed by Rafalense and Alexmods but as of today, the version maintained by HeyMods is the best, and therefore, the unofficially official one.

What is GBWhatsApp Pro and how to download it?

GBWhatsApp Pro is another WhatsApp MOD different from the classic GBWhatsApp, although developed by the same creators. It has the same package name as GBWhatsApp, and therefore, cannot coexist with it on the same mobile device.

GB WhatsApp Pro is a much more recent development than GBWhatsApp, something easily noticeable in the app's version number. These two MODs are very different from each other since the Pro version incorporates a unique caller ID feature that lets users name any incoming call. Otherwise, the functions are very similar if not identical, and the Pro label only serves to add value to the name of the app but not to its features.

This MOD can be downloaded directly from the developer's website or through the dedicated GBWhatsApp Pro page on Malavida. Note that to install it, you will first have to uninstall GBWhatsApp as they cannot coexist on the same phone.

What is GBWhatsApp Plus and how to download it

Is it safe to use GBWhatsApp? Can I get banned?

The GBWhatsApp APK we offer at Malavida is virus and malware-free as all files hosted on our servers are automatically scanned by a web service that works with over 50 different antiviruses. Even if it does not have malware, we cannot categorically state that GBWhatsApp is 100% secure. As this is an app created by a third party, the following two reasons make it impossible for us to state this with complete certainty:

How to download and install GBWhatsApp APK step by step

To download and install the GBWhatsApp APK, follow the steps below. If you still have any doubts, please check our more exhaustive and complete installation guide.

If you already have WhatsApp GB installed and just want to update to the latest version, you can delete the current app and repeat all the steps above, or do it the way by following these steps from the MOD:

Using GBWhatsApp has its positive side but also its negative aspects, which must be considered to see if it is worth using this MOD to the detriment of the official WhatsApp.

What's new in the latest version of WhatsApp GB 2023

GBWhatsApp is continuously being updated, not only to keep pace with the official app but also to introduce different improvements. These are the latest innovations introduced in this MOD: