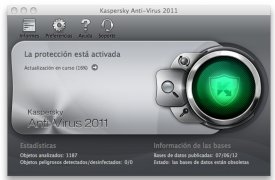 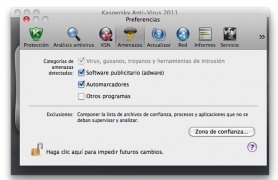 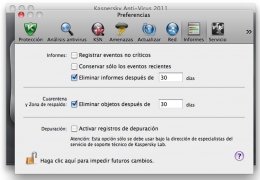 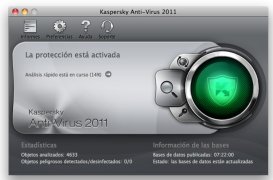 Kaspersky Lab is one of the most important companies when it comes to developing computer security applications, and unlike many of its rival companies, it doesn't only develop applications for Windows, because it also develops programs for Mac such as Kaspersky Anti-Virus.

Protect your Mac from the dangers lurking on the Internet

Kaspersky Anti-Virus for Mac is the ideal program to maintain real-time protection of your computer because it analyzes all the files that interact with the system to make sure that none of them is a virus or any other kind of malware.

One of the best security programs for Mac.

Another of the things worth noting of Kaspersky Anti-Virus is that its developers have managed to optimize it in such a way that it hardly requires system resources, to such an extent that it only uses 1%.

Like the majority of antivirus applications, Kaspersky Antivirus for Mac can be configured in such a way that it periodically analyzes the computer's whole hard drive to make sure that no threats have managed to infiltrate the system.

Kaspersky Total Security PC 21.3.10.391
Other languages
We use our own and third-party cookies for advertising, session, analytic, and social network purposes. Any action other than blocking them or the express request of the service associated to the cookie in question, involves providing your consent to their use. Check our Privacy Policy.