Shadow Defender creates a virtual copy of the system so as to install programs without them affecting the computer. Defend your PC with Shadow Defender 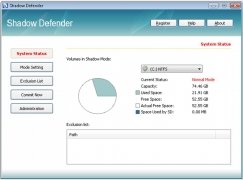 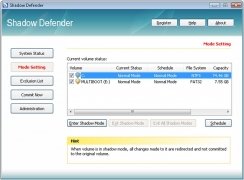 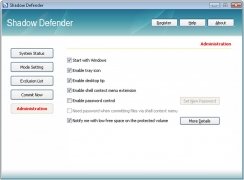 Installing a program can cause certain problems to the operating system, specially when the program's origin isn't clear. To avoid these dangers and threats you can use Shadow Defender.

The mechanism used by Shadow Defender is rather simple, because it creates a virtual system called “Shadow Mode” on which it will install the programs so that they won't directly affect the real system.

Once the program has been checked, and you're sure that it hasn't affected the system negatively it will be possible to disable the virtual system to really install the application, and if you decide that you don't want to install it, you'll only have to reboot the computer to get rid of the changes.

A powerful tool to protect your computer.

Among the options of Shadow Defender it's worth highlighting that it offers the possibility to choose the folders that will really be modified despite the virtual system.

Download Shadow Defender to make sure that applications are safe before installing them on the computer.

Antony Peel
7/10
Shadowdefender.com
Over a year ago
More than a year ago
3.3 MB

Freeze the system for protection

Protect your computer by means of virtualization

Work avoiding changes to your PC

Freeze your system to avoid that it being infected