14.40.0 Access your user account on Netflix through the app for iOS devices and watch movies and TV series wherever you want, regardless of your Internet connection
8/10 (187 Votes)
Download 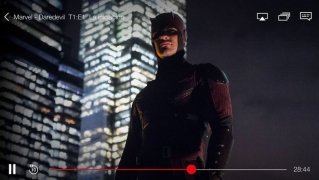 Over the last few years, Netflix has managed to become one of the most important on-demand TV services all over the world, mainly thanks to getting a head start over its main competition such as HBO or Amazon Prime Video.

Movies, series, and documentaries, online and via streaming

As you already know, this is the offer of the Californian service that was born as a video club that used the Internet to manage the rental of movies and that led to an online audiovisual giant putting up a real fight against traditional television. TV channels have had to reformulate their business approaches due to the presence of actors such as the subscription services with unlimited access to contents for a reasonable monthly price. They've definitely changed the way we watch the telly.

A monthly flat rate that give you access to everything.

And that shouldn't surprise anyone taking into account that we can access its entire catalog from our PC, thanks to its desktop client or via its webapp (which is also the solution for Linx and macOS), or by downloading its APK to our Android smartphone or tablet, or from our Smart TV, as well as the app for iPhone and iPad. We can watch almost anything, from its own productions such as Narcos, Stranger Things, House of Cards or Bloodline, to contents produced by other such as Ray Donovan or Breaking Bad. There are more than 5,000 titles available that can be watched when and wherever we want.

If you decide to subscribe to this service, you'll be able to enjoy all the following features and functions:

Contents available on and offline

Yes, that's right, you can download movies and episodes of series available on Netflix to watch them offline. How? Well, it's a function that can be used on its mobile apps, whether iOS or Android, that we can access from a smartphone or tablet. You've only got to search for whatever you want to watch and check if it's marked as Content available offline. If so, we can download it and take it with us wherever we go without worrying about our data plan or searching for a WiFi connection. However, just like on Spotify with its songs, the files can only be played in the app, so forget about ripping them.

We're not going to take sides in its war against HBO. We believe that both platforms offer us a very appealing catalog for a similar price (between 8 and 12 dollars per month) depending on the number of users that share the same account. But if we've also got time to watch Game of Thrones, Westworld, and The Sopranos... go for them both.

Yes, you can make use of Pordede, Popcorn Time, Stremio, and company. But honestly, why do something illegal if you can get hold of such a great service that always works, that has a customer attention service and that offers such high-quality video (even 4K), being totally legal?

Listen to music on your iPhone

The song hunter application for iPhone to discover and identify music

App to listen to music online and for free

Netflix PC 6.98.1805.0
Other languages
We use our own and third-party cookies for advertising, session, analytic, and social network purposes. Any action other than blocking them or the express request of the service associated to the cookie in question, involves providing your consent to their use. Check our Privacy Policy.