Locate and neutralize the activity of cheats in online games. Download Cheating-Death for free, it will allow you to neutralize people trying to use cheats 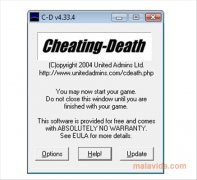 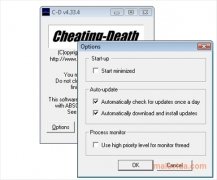 One of the greatest problems of online games are cheats. Users that manage to modify the game to take advantage regarding other players to make it easier for them to win or, simply, to bother. This kind of incident can be eliminated with Cheating-Death.

Make sure nobody cheats on you

Even though nowadays most games include their own “anti-cheat” manager, there are still some servers that can't be accessed if you aren't running Cheating-Death on your computer, this is a way to make sure that nobody is cheating.

The list of games that have had problems with cheats is rather long, including titles like Counter-Strike, Day of Defeat, Cross Fire or Combat Arms, that have had to face hordes of players that by running programs in the background or using modified versions of the game managed to aim always at the head, jump higher or run faster, to name a few cheat mods.

Thanks to this software, any program that modifies the ordinary behavior of any game will be detected automatically and reported to the server to make sure that we aren't playing with any cheats.