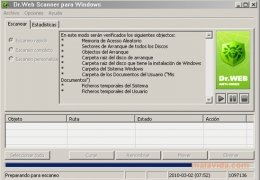 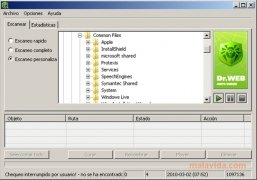 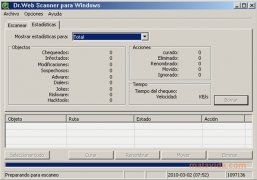 It has happened to all of us, that even though we have a good antivirus, there is some virus that manages to get into our system and start wreaking havoc. This is a real problem because on many occasions the antivirus files are also infected and are impossible to clean. Unless we use Dr.Web CureIt!

Antivirus that works in portable mode

This software doesn't require installation, it is simply an executable with a powerful virus scanner that searches, finds and neutralizes all kinds of potential threats that may be hidden on our computer.

Since it doesn't require installation, this antivirus can only be used to solve problems, because it doesn't protect in real-time like the majority of antivirus (that start guarding from our system tray). Dr.Web CureIt! has been developed to clean a system that has already been infected.

For the same reason that it doesn't install, it is also impossible for it to automatically update, making it essential to download it just before using it, thus ensuring that we find as many viruses as possible and the best antidotes.

Efficient tool against viruses and other threats