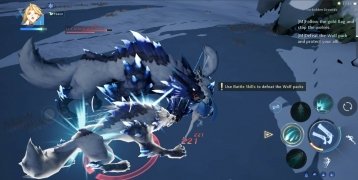 Dragon Raja is a third-person MMORPG action game where we start by choosing our own hero from several different classes. The adventures are set in the universe of the epic fantasy novels that the game is named after and has been developed using the Unreal Engine.

This a classic format game within the MMORPG genre. One familiar aspect is how the game itself plays out; we start with a low level character that steadily improves as we carry out simple missions. They help us gain experience and, little by little, face bigger challenges. These basically consist of battling powerful enemies. As we progress through the story we can unlock powers, characters, elements to customize our heroes, decoration for our house...

The control system is intuitive and simple, similar to other games of the same style: on the left side of the interface we have the direction controls for our character while on the right side we have the action buttons with which we attack and defend ourselves.