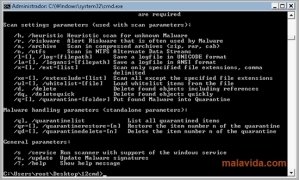 Scan your PC searching for malware

One of the advantages of Emsisoft Commandline Scanner is that as well as including all the power of its similar programs with an interface and of being a technology inherited by A-Squared Command Line Scanner can be programmed or included in frames. Automating how it works.

On the other hand, if you access PC remotely via terminal, it is possible to launch it and use it without any problem, even updating it.

Emsisoft Commandline Scanner includes the Emsisoft Anti-Malware and Ikarus Antivirus scanners, combining their power and functions to find even the most hidden worm on your system. In fact, the software already includes various preset scans that allow us to search in depth or simply clean the system.

Efficient and free protection against threats