KishKish SAM is a practical answering machine to record your Skype calls when you aren't there. Download KishKish SAM for free and don't miss any calls 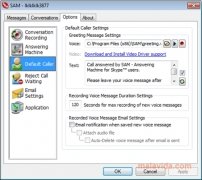 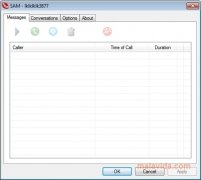 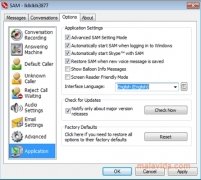 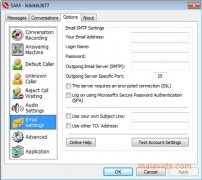 KishKish SAM is an answering machine to be able to deal with the incoming calls to your Skype account when you aren't in front of your computer. This application, that used to be known as SAM (Skype Answering Machine), will take care of answering the calls when you aren't available, with the possibility to record your own message so that you friends can hear it when they call.

Answering machine for your VoIP services

This answering machine will allow you to record messages in WAV format so that they are played when someone calls you on the Skype VoIP application, and you aren't available. KishKish SAM allows whoever that calls you to listen to our recording and to leave their own message. When you launch the program, these messages will appear on a list and you will be able to listen to them.

Make sure you don't miss any calls on Skype.

KishKish SAM also allows you to record conversations to be able to listen to them later. From the program's configuration, you can establish that KishKish SAM is launched each time that you launch Skype, or for it to run each time that you turn on the computer. You can also launch various instances of the application,

Text messages, calls and video calls to and from phones and PCs

Skype Mac 8.78.0.159
Other languages
We use our own and third-party cookies for advertising, session, analytic, and social network purposes. Any action other than blocking them or the express request of the service associated to the cookie in question, involves providing your consent to their use. Check our Privacy Policy.