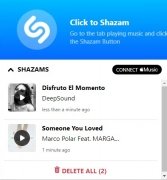 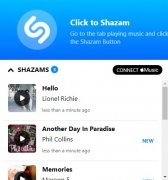 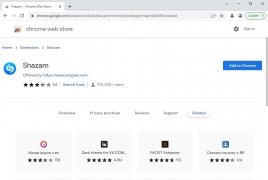 Until not so long ago it was quite complicated to find out the name of that song that we liked on the radio or from a certain TV advert. It mainly depended on being with the right person who knew that song. Now that uncertainty is over thanks to Shazam, the music identification and recognition app developed for iPhone and Android, and that we can now also use on our Windows PC.

And although we may think that the natural environment for this software definitely has to be its mobile app version, the truth is that it can also be quite useful on a PC. Just imagine that you're watching the TV with your laptop in front of you, listening to the radio, or watching a movie or show on Netflix, and all of a sudden that song you like starts playing. What's its name? Don't worry, just press the button and find out immediately.

Press the button and wait: in a few seconds it can recognize any song.

Just like the versions for smartphones and tablets, it's an application that you can download and use totally free of charge and that connects you to an online database to offer you up to the slightest detail about the song you're listening to (name, author, album..,) and the possibility to download the track legally in MP3 format (totally legal download of course). And it works exactly like the mobile version because this download precisely offers us the APK file and an Android emulator of the likes of BlueStacks.

The reason why we have to resort to this somewhat shabby solution is that the developers of Shazam decided to remove this software from the Windows Store at the beginning of 2017 after releasing it hardly 2 years earlier. Therefore, there's no such thing as a native version for Microsoft's operating system, although there are plenty of online alternatives of the likes of Midomi or TuneFind.

Main features of Shazam for PC

One of the advantages offered by this application is its user area that makes the experience much more personal thanks to the possibility to access our history of music identified through the application. In turn, we can make this history public and see which Shazam users have used the app to identify that same song, as well as the rest of the tracks they've identified: you can discover music thanks to users with whom you share similar tastes.

Shazam Mac 2.10
Other languages
We use our own and third-party cookies for advertising, session, analytic, and social network purposes. Any action other than blocking them or the express request of the service associated to the cookie in question, involves providing your consent to their use. Check our Privacy Policy.