Translate2 is a simple application to translate texts. Download Translate2 and get hold of this free translator that doesn't require an Internet connection 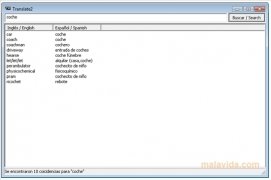 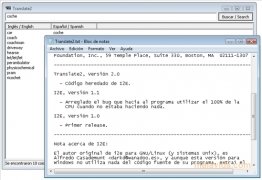 Translate2 is probably the most simple program in its category. It is a desktop translator with a rather dull interface, that has nothing to do with developments like Babylon (that is a lot more appealing and complete), but turns out to be very practical, due to the fact that it doesn't require an Internet connection, nor does it need many system resources.

The most simple translation software worldwide

The program shows a window with a search box, in which we will be able to check the word in English or Spanish, and it will quickly show us the possible translations of the given word in the other language.

The application can be a good tool to use on a PC that doesn't have access to an Internet connection that is going to be used by someone that studies Spanish because it doesn't translate full texts (this will avoid the temptation of cheating).

Another of the program's advantages is that it doesn't require installation and, due to this, we will be able to take it wherever we want on a pendrive.