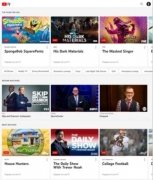 By simply logging in with your YouTube username, you'll be able to access a wide offer of television channels. This service goes by the name of YouTube TV and, by means of online streaming technology, allows us to tune into any of these channels thanks to the connection of our device to the Internet.

This service, that comes along with versions for Windows PCs and Android in APK format, is offered by means of a monthly subscription that allows you to share your account with up to 6 users. It costs about 35 dollars and, for the time being, it's only available in some of the largest cities in the USA: New York, Los Angeles, San Francisco, Chicago, and Philadelphia.

The cable TV of the 21st century.

It includes 40 channels of all sorts, with both thematic and general contents, offering us sports, children's entertainment, movies, and series. These are some of the channels available:

It works as follows: the app detects whether you're in an area in which this package of online channels is available, and if so, allows you to connect to the service.

It comes along with interesting functions and features, such as the possibility to get hold of unlimited cloud storage space to record contents from any of the TV channels available. Furthermore, it allows 3 of the 6 users of the account to watch TV at the same time.

It's basically an online on-demand television service offered by Google through YouTube and that will definitely expand to more locations in the future.