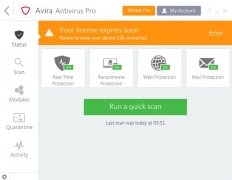 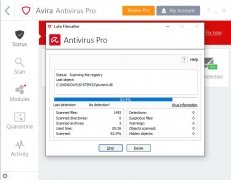 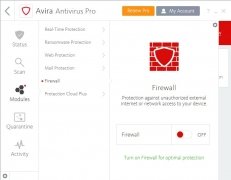 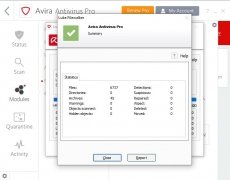 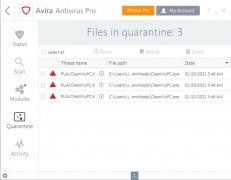 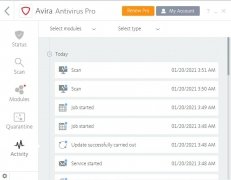 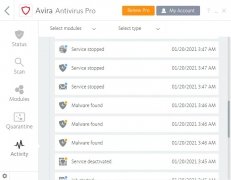 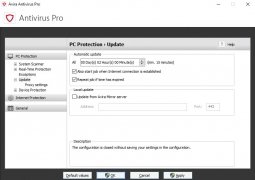 Which is the best antivirus? That's a usual question amongst users that want to install one on their computer and that may have different answers depending on whom you ask: Kaspersky, Avast, McAfee, Norton, Panda... and Avira, of course. The German developers offer us one of the most impressive detection programs which offers the best results to its users.

They have developed a tool that adapts to all the needs that any average modern user may encounter. In other words, it protects us against the most common threats that can be found on the Internet and that have grown exponentially over the last two decades.

Avira's antivirus for Windows that protects your online activity

It's getting increasingly difficult to protect our purchases over the Internet or our access to a bank because, nowadays, the aim of malware is no longer to cause damage but to steal banking data and credentials.

Spam, phishing, trojans, viruses... put up a wall against malware thanks to Avira.

We have to remind you that Avira is one of the most awarded companies in the computer security sector. In Avira Antivirus Pro we can find a product with advanced functions capable of protecting the most sensitive areas of the online activity of any user:

As usual, all the latter presented on a very simple and usable interface. From there, we can easily access all the program's functions, being able to run manual detection processes or schedules scans, generate reports or check the quarantine area for suspicious files.

It incorporates Avira's very own cloud-based technology, which offers us early and constant protection against any threat by analyzing suspicious unknown files and its servers, in a totally anonymous manner. Therefore, it guarantees the user's real-time protection.