Which Brawlers are the best for each mode in Brawl Stars

Brawl Stars offers you many possibilities when choosing a character to play your matches, but are you choosing right? 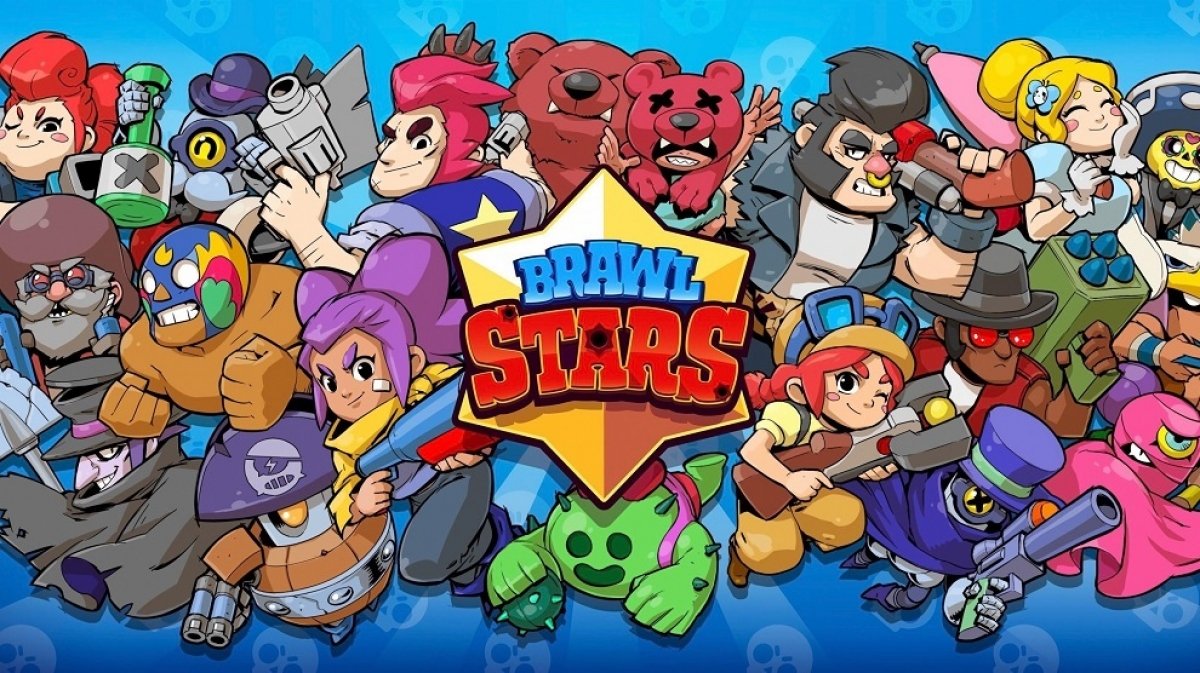 It is not the first time we say that each brawler and its skill set are more or less useful depending on the scenario. Here we will learn about it.

This is the first game mode, the one we all start with. It is played with two teams of 3 players and the winner is the player who first collects 10 or more gems and holds them for 15 seconds. In this mode, what matters is crowd control and a global vision of the scenario.

For this mode, Pam can get you great results. Why? Because in this arena, brawlers with damage or area healing can play a key role. This brawler's special skill places a healing siphon that heals characters within its area of effect. If you place the siphon in the center of the stage and your teammates stay close to you and the siphon, victory is assured.

Another aspect to keep in mind about Gem Grab is that crowd control is extremely important, something that Nita and her bear are specially designed for. Nita is fast and deals moderate damage, while her pet will attack anyone who approaches her, also deals a considerable amount of damage, and is capable of taking many shots.

Showdown mode is the battle royale of Brawl Stars: it is an all-out contest where the last person (or the last couple, as it can be played cooperatively) wins. The safe zones get narrower with the appearance of smog that will gradually kill the brawlers in range. 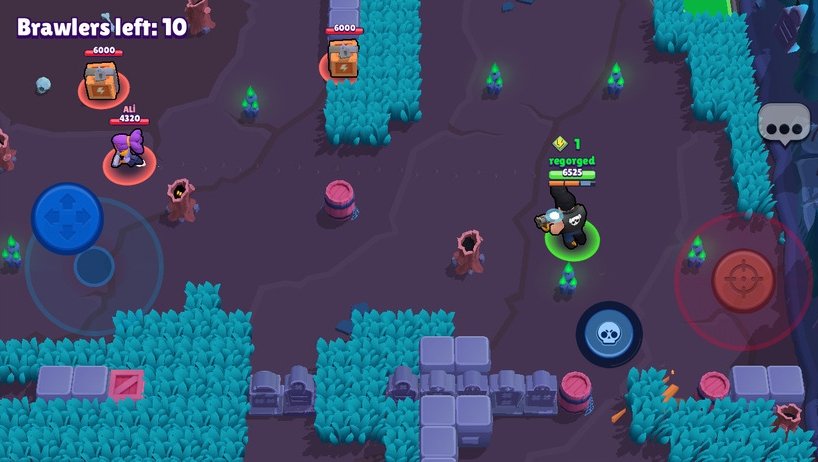 The most versatile character for this mode is Shelly (she is the most versatile for everything), but with El Primo, she gets the best results. Another brawler to consider for his shooting ability is Colt, who can attack from quite a distance and remain relatively safe at the start, although this could be a problem at the end of the match. Bull is also highly recommended, due to the damage he deals at close range and the number of shots he can take.

In this mode, you will find a ball in the middle of the field, and you will have to push it into the opponent's goal to win (the first one to score two goals wins). How you manage to do that is up to you, but there is an indisputable truth in this mode: if you control Frank, your team will start with an advantage.

Frank is one of those big tanks that, more than anything, deal lots of damage. He is the character who inflicts the most damage with one hit by far, but he is also the slowest. Frank's big advantage is that, while other players focus their playing power on your teammates and try to hurt you (you can take lots of damage), you can sledgehammer them at will (that does not mean you are invincible, although you will survive for a long time).

His special skill is a strike that, in addition to doing lots of damage, paralyzes opponents for a few moments, letting us reload it in a short time. If you play your cards right, you can be an unstoppable killing machine while your teammates are busy scoring goals.

In this mode, we will face a Godzilla-type monster that will destroy the stage. Our goal to win the game is to take down the monster before that happens, along with two other players.

This mode is new and has forced most players to reevaluate their strategies (nothing to do with Boss Battles or Big Game Hunting), but it is possible to achieve great results by using Colt, Pam, and Shelly. El Primo is also recommendable when playing this game mode.

Colt can shoot from a long distance and his special skill deals lots of damage by repetition, while Pam can help the team die as few times as possible with her health siphon and her rapid-fire machine gun. Although she does not have much power, she may be enough to help keep the threat at bay.

The objective of this scenario is that your team manages to break the safe box on the side of the opposing team (and vice versa). You have to do this before time runs out, otherwise, the team that received the least amount of damage will win.

The best brawler (from a statistical point of view) for this mode is Spike, although DynaMike, Bull, and Colt, are also highly recommended. However, it looks like Carl can get the best results. Here, you have to be a little kamikaze to get some advantage, and Carl is perfect for that.

Besides, his pick/boomerang does quite a significant amount of damage, is relatively fast, and his special ability deals tons of total damage. He may not be the most powerful, but for this mode, he is just great.

In this arena, all the characters start with two stars above their heads, which are increased when they defeat enemies. The team with the most stars in total wins when time runs out.

Barley is especially suited for this mode because of his area damage, and his ability to place shots in virtually anywhere in the scenario. His special skill can be the final blow to any enemy about to die.

This mode is the Brawl Stars tower defense, perhaps the one that reminds most of MOBA. In this mode, we have a tower robot on each side of the arena, and the goal is to destroy the opponent tower before time runs out. During the game, screws will appear on the screen, summoning an attack robot whose power will depend on how many screws we have accumulated. However, it should be noted that the robot will only appear for the team that has accumulated the most screws. If there is a tie, there will be no robot until it is undone. 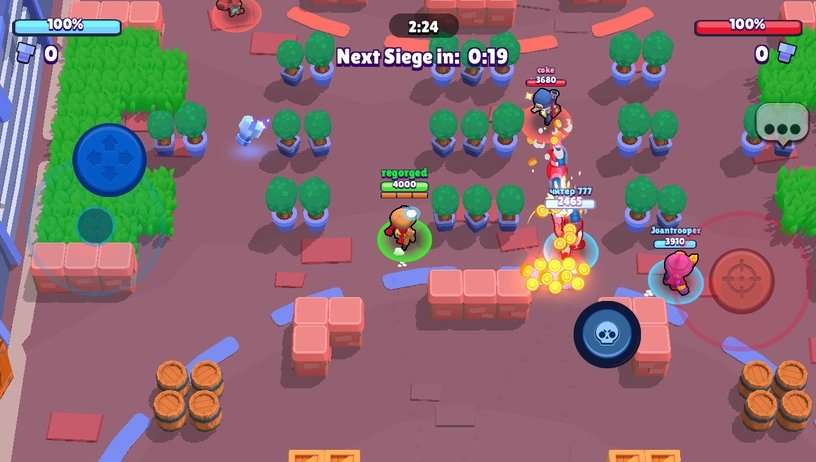 The best brawler for this situation is Penny, for her ability to shoot from afar and special skill that places a cannon that shoots when it detects enemies in its range. DynaMike, Barley, and Brock are also very interesting, and we should not lose track of Jessie.

In this mode, the teams focus on controlling one or more areas that appear in the arena while defending them to prevent the opponent from taking over. The game ends when time runs out, and the one with the most controlled zones, wins. This mode is straight out of the classic FPS multiplayer modes.

The most suitable brawlers for this type of game are Mortis, Jacky, Rosa, Bibi, El Primo, and Leon, but it is important to keep in mind that any character whose special ability deals damage from afar (just like Penny or Jessie), or heals in the area (like Pam), are also great to keep an area under control.

In this mode, a team of three players faces a mega robot that must be defeated, while mobs appear on the screen that we will have to eliminate to increase our chances of victory. This is a game mode that is hard to beat if you do not use a proper strategy, so having a trained team to communicate with is essential.

It is easy to choose a character here. By pure statistics (and also by logic), Colt is the best choice. He moves fast, can shoot from long distances, and his special skill can deal lots of damage, making him a match for the hordes of mobs and boss.

Characters like El Primo, Nita, or Pam (especially for their healing ability) are also interesting in this context, but you should not underestimate Shelly, for her versatility, or Jessie for her special attack (a turret that attacks the enemies as soon as they come into range).

This game mode is very simple: a player acquires the proportions, strength, and amount of life of a boss, and a team of 10 players must hunt it down. This is one of the funniest game modes.

The most efficient brawler in this mode is Mortis because of his high amount of damage per second, followed closely by Poco, Sprout, Jacky, Pam, and Tick. Crow, Carl, and Spike can also be especially useful in this mode. For your matches, try to have characters that can attack quickly and inflict a good amount of damage constantly.

This mode is quite particular. During the game, we will have to face waves of robots that come after us, with the particularity that the stage does not have a determined purpose, instead, you must fight until your team can no longer resist the attacks. 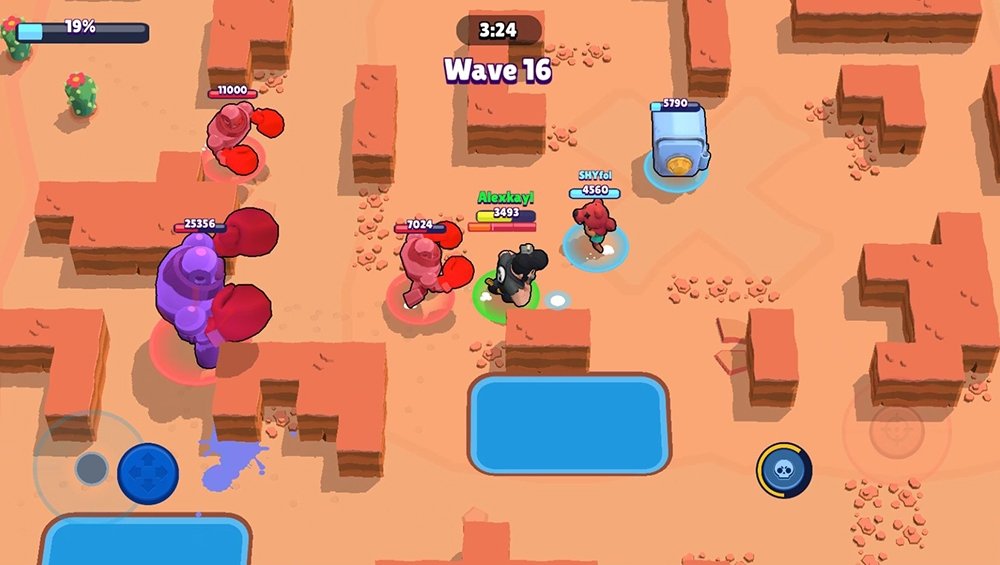 For this mode, characters like Jessie, Penny, or Pam are especially useful because of the defensive towers they deploy when their special attacks are activated.