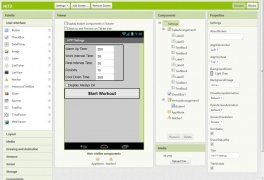 An MIT has set out to develop MIT App Inventor 2, an intuitive development environment that intends to allow us to develop fully operative apps for smartphones and tablets in under 30 minutes.

Create your own Android applications without having a clue about developing

It's a piece of software based on a block construction system which reduces development times significantly when compared to the usual development environments. The idea is to help anyone without great development knowledge, and especially young users, to apply valid ideas to the technological field.

This Android application editor is based on two tools:

This tool was released back in 2008 and has millions of users and loads of online resources at present. Therefore, if you decide to download it and create your own Android app, you won't have any trouble finding App Inventor manuals and video tutorials on YouTube.