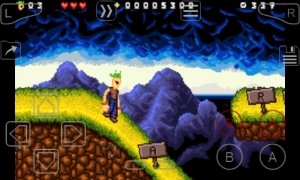 We have to admit that, despite not being as charismatic as the first Game Boy, Nintendo portable console sold between 2001 and 2008, Game Boy Advance, still has a legion of followers and fans. And as so, they should all be interested in My Boy! - GBA Emulator, the app that allows you to play on your Android device all the games of this pocket video game console.

With this emulator, you can have fun playing the game commercialized for this recreational platform before the arrival of smartphones just wiped out these portable systems. If you download the APK to your smartphone or tablet, you'll be able to get hold of a faithful recreation of the video console that brings back the feeling of playing on the GBA.

The best way to remember your childhood playing on Nintendo's GB Advance.

Once you've installed it, you'll have to download the ROMs to run them on the app. Therefore, you'll be able to play on your phone some great classic titles such as Mario and Pokémon by means of on-screen controls.