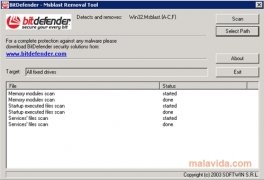 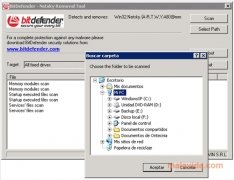 It's strange to find a virus the task of which is to get rid of another virus, some variants of Netsky are just that, but they are still software that spreads and works without the permission of the computer's owner. So we have to get rid of them with Netsky Removal Tool.

The most dangerous variants of Netsky send SPAM from each computer that they've infected, spreading to thousands of computers in 2004. Logically, when it sends SPAM to all the contacts in the computers address book, it also sends itself, usually trying to deceive that user by means of sentences like "the document that you asked me for is in this mail".

With regard to its cleaning functions, some versions of Netsky eliminated the Mydoom and Beagle viruses, although it was actually Netsky that infected the system. But now, none of the three will be able to achieve anything thanks to Netsky Removal Tool.

This program includes a powerful scanner that detects several different variants of Netsky and quickly eliminates them, therefore, it won't be necessary to format the computer or follow complicated virus elimination guides.