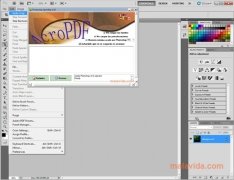 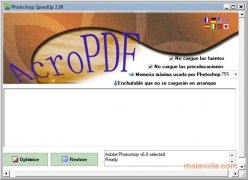 Photoshop SpeedUp is an application that has been specifically designed for those users that consider that the renowned Adobe Photoshop software is far too slow, and that want to make it slightly faster. This software is a small utility that has been developed to optimize the launch and operation of the best photo editor on the market.

Speed up the use of Photoshop

One of the most criticized things about the program by Adobe when it comes to using it, is how slow it opens, due to the large number of libraries and options it loads, that are unnecessary on many occasions. Photoshop SpeedUp avoids that the CMap and Base fonts are loaded, as well as making sure also that some user customizations aren't allowed, thus saving plenty of time.

It's also important to highlight that some plug-ins can be deactivated with the idea in mind of making the program quicker, this can come in very handy when you know what you're doing and, therefore, know which elements you can do without.

Photoshop SpeedUp also allows us to optimize and manage the amount of maximum memory that the user allows Photoshop to use, as well as easily restoring all the original configurations.

The free and simple image editor that you were looking for

A free and open-source image editor

A lightweight and functional image editor for Windows

Professional photo enhancement on your PC

Adobe Photoshop Mac CC 2022
Other languages
We use our own and third-party cookies for advertising, session, analytic, and social network purposes. Any action other than blocking them or the express request of the service associated to the cookie in question, involves providing your consent to their use. Check our Privacy Policy.