Plants vs. Zombies for Android is an excellent strategy game in which we'll defend ourselves against waves of zombies with an arsenal of deadly plants 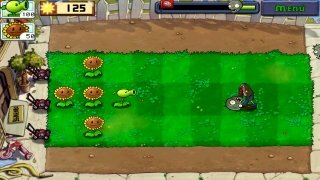 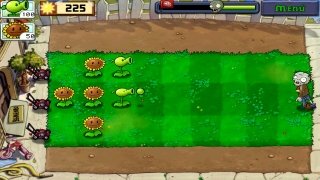 In this game, the catchphrase 'I love you because of your brains' acquires its full meaning. Plants vs. Zombies is possibly the most popular tower defense game of the last few years and probably the weirdest within this genre because Bloons is in another category: bursting balloons with shooting monkeys is totally serious.

At this stage, you surely know what this game is all about. Basically, a strategy title in which you have to protect the perimeter of your house against a zombie invasion just like in The Walking Dead and in which your only weapons are your botanical techniques and your gardening knowledge.

In other words, you have to prevent the undead from getting anywhere near your porch, and for such purpose, you can make use of different varieties of plants to shoot against the invaders. You'll have to spread them around the area strategically, keeping in mind different types of shots and where the invader may access your grounds.

With this antizombi war method, The Walking Dead would have only lasted a couple of episodes.

As you can imagine, things are quite simple to start off with: only a few zombies and a very foreseeable behavior. But as you advance through the game, you'll start to feel the pressure with more and large waves, and different behaviors to try to break into your house. You'll have to manage your resources well to be able to plant them faster and place your vegetables in the correct position.

The success of this game is completely undeniable and not only is there a version in APK format for smartphones and tablets but also an iOS version for iPhone and iPad, and also an edition for Windows. In all these versions we can find features and functions such as the following:

To improve your defenses you need to collect sun to feed your plants. You can also purchase packs of coins in order to purchase different improvements and speed up the growth of your garden.

This game has been such a success that it has led to other versions, such as a second part (Plants vs. Zombies 2), Heroes or Garden Warfare, also available on Windows, Xbox 360, Xbox One, PS3, and PS4.