Python is one of the most simple and complete programing languages among all those that exist. Download Python free and learn everything about how it works 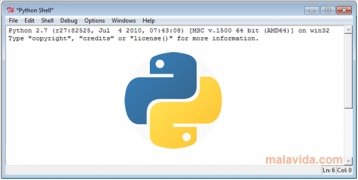 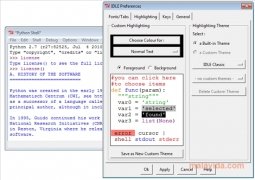 Python is possibly one of the most practical programming languages that exist. The clearness of its code and how easy it is to work with modules and reuse code have made Pythong an enviable language. It's very easy to learn with Python, thanks to the large amount of modules that the program itself includes by default and that are examples that are very easy to understand.

Ideal for both beginners and expert coders

Interpreted programing languages have the advantage of being able to be modified without having to perform new compilations or to link. This is something very useful in large projects or during the learning process.

This language was born at the end of the 80's and hasn't stopped gaining adepts due to how easy it is to use. In 1994 Guido van Rossum launched the first full version, that has evolved over the years until it has become compatible with almost all the operating systems and devices that exist, including Linux, Windows, Mac OS, Solaris, OS/2, Amiga, AROS, BeOS, z/OS, Palm OS, QNX, VMS, Psion, Acorn RISC OS, VxWorks, PlayStation,...

User-friendly and easy to learn.

Python has several standards that set the path for its evolution, some that are worth highlighting are “Simple is better than complex” or “Practicallity beats purity” under which the main decisions are taken, so as to maintain a set of values and the language's core philosophy.

Antony Peel
8/10
Python Software Foundation
Over a year ago
More than a year ago
24.2 MB