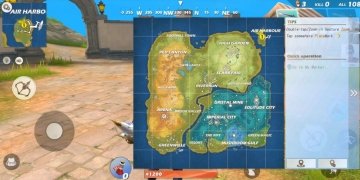 NetEase has become one of the many video game development studios that have has become fully committed to battle royale games. They don't intend to compete against Fortnite, although they are willing to put up a fight against PUBG with games of the likes of Rules of Survival, amongst others. They're back with Ride Out Heroes, an all versus all game set in a magical environment.

The game combines epic fantasy and steampunk and follows the same usual story: we'll be dropped off on an island and we'll have to do whatever it takes to survive. This time around, we won't be able to make use of machine guns or grenade launchers, although we can come across a shotgun now and again, as this is more about swords and magic spells, more like a role-playing game than a third-person shooter.

100 hundred players will take part in each game at the same time and there are different kinds of characters with very specific skills: hunters, warriors, mages, engineers, and pirates. Each one has its own weapons, four skills, and a way to move around. And if we become good enough, we can also choose different skins for our character.

Download the APK of this battle royale that's so different but also so similar to all the rest of them.