Teeny Titans - Teen Titans Go! is a game based on the cartoon series Teen Titans. You can enjoy the adventures of these superheroes on your Android 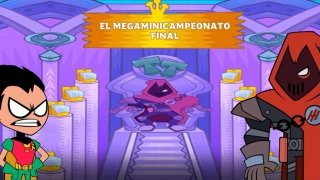 Back in 2003, when cartoons with simple and exaggerated drawings became a trend, Cartoon Network broadcast a five-season series that narrated the adventures of the teenage version of superheroes of the likes of Robin, Cyborg, Raven, Starfire, Beast Boy, and Terra. They were called Teen Titans and their mission was to protect Jump City from the bad guys and pineapple pizzas. Teeny Titans - Teen Titans Go! is the game for Android that adapts those strange cartoons.

Choose your team and fight in 3 vs 3 battles.

So everybody knows that DC's heroes aren't going through their best moment. Their movies aren't too good so any approach to bring back some more audience is always a risk, especially if the product features Robin. But, if you dare to play, you'll discover a decent and entertaining game in which you can collect up to 70 figures of your favorite (more or less) DC characters. These digital figures are similar to Nintendo's Amiibo or Disney Infinity. So, depending on the avatars you place on the platform, you'll choose a team to fight against your opponents.

Your goal? To make money to be able to buy more and more figures from the stores around town in order to build a great and invincible team. The problem is that the Teen Titan frenzy has spread around Jump City so it won't be easy to get hold of them all.

How to get hold of Harley Quinn?

If you're a fan of Harly Quinn, pay attention to the following lines. To get hold of this character you'll have to go to the park and talk to a smiley guy wearing a hat that will offer you contraband dolls from under his raincoat. Buy Silkie to complete the mission of the kid that wants rare figures. Then you'll jump to a new mission in which you have to talk to commissioner Gordon once again. He'll tell you where you can find the store that sells the Harley Quinn figures, so you only have to go there and pay for it (it's on the right-hand side in a separate cabinet) and take it to this lazy man. But it turns out that Batman has already but it for his birthday so you can keep it for your own collection.