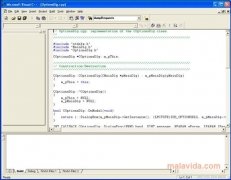 Visual Studio is an Integrated Development Environment (IDE) promoted by Microsoft to simplify the work of developers that use a Windows Operating System.

In 1998 the software giant from Redmond launched Visual Studio 6, a version that is still used quite often nowadays because it is the last one that works on Win9x platforms, and preceded the implementation of .NET Framework.

Fifth Service Pack that Microsoft launched for their development environment

A Service Pack is a pack of improvements, patches, and fixes for a specific software. During their useful life, the majority of applications and operating systems developed by Microsoft receive one or more Service Packs.

In the case of Visual Studio 6, it had six Service Packs, Visual Studio 6 SP5 was the second from last to be launched, and it primarily improved the software's stability and fixed some errors that had been detected in the months prior to its launch.

If you're a user of Visual Studio 6 Professional or Enterprise edition, you have to download Visual Studio 6 SP5, because it is a general improvement for that software, that will improve your work productivity.