WhatsApp Plus is an APK that can be used to modify the features of WhatsApp for Android. It comes along with different themes and customization options 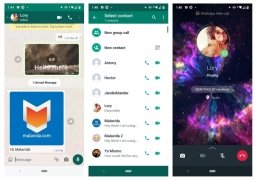 If there’s one application that can’t go missing on any smartphone in the world, whether Android or iPhone, it definitely has to be WhatsApp. The instant messaging and chat app conquered millions of users some time ago, who forgot about sending SMS messages and moved over to this service that’s based on traffic sent over data networks.

Well, with over 1 billion active users all over the world and purchased by Facebook, it has consolidated as one of the most downloaded apps in the world. Therefore, nobody should be surprised that dozens of third-party applications have been developed to try to take advantage of this service.

Amongst the most popular applications of this nature, we have to mention WhatsApp Plus, a mod that we can download for free to customize the application with options that go way beyond those offered natively by WhatsApp.

And now that you know what WhatsApp Plus is… What’s it for?

Well, as we said above, it can be used to customize the messaging and chat app. It’s mainly aimed at all those users that aren’t fully satisfied with the latter, and that simply use it because everybody else does so too, even if there are other alternatives of the likes of Telegram that may be better.

Almost everyone thinks that this messenger has quite a few aspects that could be greatly improved and that’s precisely what this APK intends to do. So here goes a list of features that it’s capable of applying to the development of the original software:

However, what’s the problem with this kind of app? Well, WhatsApp is very distrusting so it bans from its service anyone detected using one of these applications. That’s why this app has gone through a few reborn such as the one developed by JiMODs, with alleged antiban properties. We can also make use of the version created by HOLO, another developer trying to take advantage of this name.

In any case, due to the wide range of offers and without knowing who’s behind the majority of developments, it’s hard to know which is the most updated version of WhatsApp Plus. Some say it’s 3.17, others say it’s 5.60… Anyhow, here’s one of these versions that you can download to your smartphone to try it out (by the way, there’s also a version for iPhone).

Opinions about WhatsApp Plus: pros and cons

WhatsApp Plus is the most downloaded WhatsApp MOD of them all here’s what the editors of Malavida think about it:

The WhatsApp without bans

More options to modify the graphical aspect of WhatsApp

Expand your control over your chat conversations