After being a hit on mobile devices, the sandbox battle royale game Creative Destruction arrives on PC so that you can fight for survival on your desktop 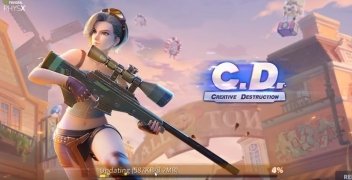 Every day there are more and more battle royale games that try to beat or at least put up a fight against the two major examples in this genre: Fortnite and PUBG. One of the most successful alternatives over the last few months is definitely Creative Destruction, a sandbox game that first was a hit on Android and iPhone, and now also on Windows.

And it is so with a native version. In other words, we won't have to download APKs to then emulate them on our PC with BlueStacks or any other similar software. Once we download and install the EXE of CD we can start playing a first and third-person shooter in which we have to survive in an environment made up of thirteen islands, whilst we collect resources and weapons, and we build whatever we want.

Destroying had never been so much fun.

But the most differentiating feature of this video game with graphics that will remind us of cartoons is that we can destroy absolutely every single element in the scenario. For such purpose, our capacity to break, rebuild and craft objects are of vital importance.

If you take a look at the gameplay videos available on YouTube, you'll see that there aren't too many differences between the mobile version available in the Google Play Store and this desktop edition. Furthermore, if you're looking for an alternative to Fortnite, this could well be your best option.

Creative Destruction Android 2.0.5761
Other languages
We use our own and third-party cookies for advertising, session, analytic, and social network purposes. Any action other than blocking them or the express request of the service associated to the cookie in question, involves providing your consent to their use. Check our Privacy Policy.