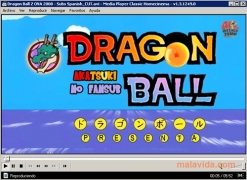 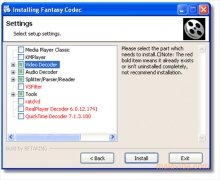 The amount of audio and video codecs that are on the market makes it impossible for any system without a codec pack to be able to open all of them. The most common thing is to be able to natively play the most popular ones and to need codecs to view or listen to the less common files. Thus, so we don't have to get all worked up while looking for the exact codec that we need, the best thing is to use a pack like Fantasy Codec Pack.

A great collection of video codecs

The collection of codecs that Fantasy Codec Pack installs is huge: Bink decoder, DivX, Realplayer, QuickTime, Indeo, Moonlight, MP3, OGG, VoxWare, Matroska... dozens of codecs, including essential ones and other less usual, will be installed. But, what's more, Media Player Classic, KMPlayer and BSPlayer will also be installed to make sure that there are no codecs left without a compatible player.

And furthermore, like many other codec packs, Fantasy Codec Pack also installs several utilities that your multimedia players will surely appreciate, because they will allow you to know a lot of data about the files you try to play, also to download subtitles or create them,... to sum up, Fantasy Codec Pack is a very complete pack and that is advisable to install so that we don't have any problems while trying to play a file.

Antony Peel
kingjiu
Over a year ago
This year
33.5 MB

Everything you need to play almost all multimedia files