FIFA Soccer is the best soccer game for the 19-20 season. This year it comes along with sizeable improvements to the simulator and real-time 11vs11 matches 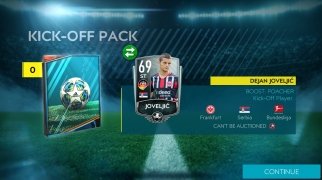 If we had to recommend just one soccer game for iPhone or iPad, we wouldn't hesitate at all to pronounce the name of FIFA Soccer. The title developed by Electronic Arts is definitely the best option for those who want to enjoy playing on a stunning simulator with dozens of options to make the most of the king of sports. Well, let's just hope that no PES fans are reading this review.

An improved simulator and real-time 11vs11 soccer matches

FIFA 20 comes along with improvements to its already excellent simulator. The gaming experience is the closest thing we can get to playing a real-life soccer match at present thanks to the fact that not only have the technical resources such as dribbling, shooting and tackling been improved but also the game's artificial intelligence: now strategies, set-pieces, and off-ball play have been taken to the next level.

But this display of resources is taken to a new extent if we start talking about the most noteworthy new features of this latest version, as is the case with its new multiplayer real-time 11vs11 soccer matches. You can join players from all over the world or your friends and take part in increasingly exciting and intense matches. And obviously, all the latter with the official licenses of thousands of players and teams from all across the planet. Therefore, you're going to be able to play with the best teams in the world such as Manchester City, Bayern Munich, PSG, FC Barcelona or Juventus as well as with some of the less-known clubs such as Mallorca, Hibernian, Waalwijk or Dijon.

These are the main features and functions that we can find in this version of FIFA for iPhone, which also updates those options that we had already become familiar with:

Don't hesitate even a second: start making the most of the best soccer on your phone with FIFA 20 for iOS.

FIFA 22 PC
Other languages
We use our own and third-party cookies for advertising, session, analytic, and social network purposes. Any action other than blocking them or the express request of the service associated to the cookie in question, involves providing your consent to their use. Check our Privacy Policy.