2016 With the Mac version of Microsoft PowerPoint from the famous office suite, you can create all sorts of presentations integrating multimedia elements
8/10 (189 Votes)
Download 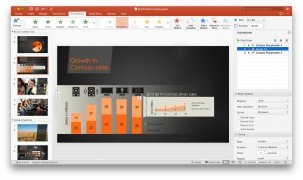 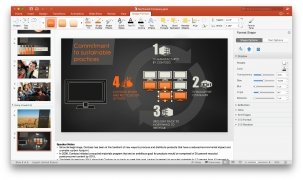 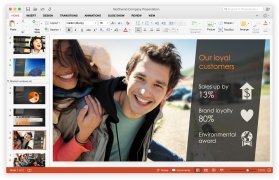 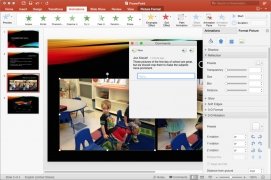 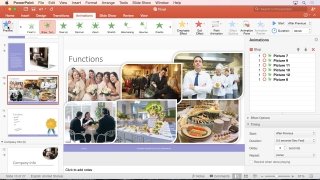 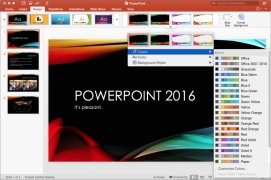 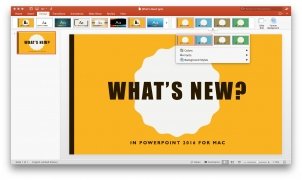 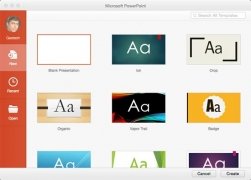 When it comes to presenting a project or idea, giving a conference or explaining any concept in public, it's always a good idea to reinforce your talk with supporting audiovisual material. And the best program to create presentations that we can download to our Mac is definitely Microsoft PowerPoint, the classic tool included in the Microsoft Office suite.

PowerPoint for Mac: the best tool to create presentations

Ever since it first appeared in the 80s', this program has evolved constantly, incorporating improvements to adapt it to the demands and technological possibilities of each moment. Nowadays, it's mainly used in work centers and schools all over the world, becoming one of the most popular resources to show our ideas in public in a summarized manner.

It's included in the Microsoft Office package and, although there's an online version of PowerPoint, downloading the desktop version offers us greater flexibility, freedom, and possibilities to work.

Prezi, Google Slides or Apple Keynote are alternatives that aren't up to its level.

The latest version of PowerPoint, 2016, has left behind functions seen in previous versions such as 2010 or 2013, as it incorporates the latest in collaborative work and connectivity. Thus, apart from using preset templates that make work faster and easier, functions to format text, animations tools, or features to include videos, audios, and graphics, we also have to mention function such as the following:

Furthermore, one of the best features incorporated to PowerPoint and the rest of apps of the Office suite is the perfect synchronization between all the different apps available on different platforms so that we can work without trouble with other devices such as iPhone, Windows PC, Android, or the online version by simply logging in with our Microsoft account.

However, we used to be able to download a standalone file to run PowerPoint but now there's no other option than going through Office 365. It's the solution designed by Microsoft to offer its office suite with a monthly subscription instead of paying a higher price all at once.

In any case, there are different plans and prices that can be adapted to the needs of each user: domestic, academic, professional... so, to be able to download the trial version, you'll have to sign up with valid payment details even if you're never going to buy the product.

The version of Microsoft's office suite full of updates

Create your own concept maps

The most used PDF Reader in the world

Microsoft PowerPoint iPhone 2.62
Other languages
We use our own and third-party cookies for advertising, session, analytic, and social network purposes. Any action other than blocking them or the express request of the service associated to the cookie in question, involves providing your consent to their use. Check our Privacy Policy.