Project: Playtime is a 6v1 multiplayer action and horror first-person shooter inspired by Poppy Playtime in which you must escape from a toy factory 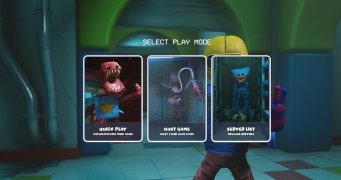 Escape from a sinister toy factory inspired by Poppy Playtime

Poppy Playtime is one of the most successful indie games of recent times and, as usually happens in these cases, it has created an active community of fans who started to develop all kinds of games related to the theme it deals with (in the original game you have to escape from a giant and sinister abandoned toy factory). Among them is Project: Playtime, a multiplayer first-person action horror game.

Create a giant toy and escape from the monster

As previously mentioned, the game takes place in the toy factory, where we will have to find all the necessary pieces to build a giant toy that will help us escape. Since it is a multiplayer game, we will have to solve the puzzles with other players who will help us in our adventure. Remember, you must solve the puzzles and put the pieces together to escape. But not everything is as easy as it sounds, as, throughout the game, we will be surrounded by a monster that will try to kill us by all means, so we will have to be very attentive to him.

The action takes place in first person, and one of the players takes the role of a monster, so we are not just fighting against an AI-controlled enemy, which makes the game very entertaining precisely because of the unpredictability of our opponent.

These are the main features it offers us:

This is a free-to-play game, so even if you have to download it through the Steam store client, you can enjoy it for free. It's not too late to dive right into the world of Poppy Playtime!