Yabause is an emulator for Sega Saturn games. It comes along with a simple interface that allows us to focus on the most important thing: loading game ROMs 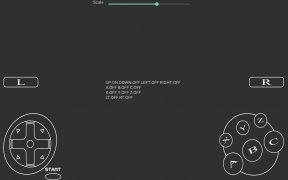 Saturn was the console released by Sega released in the mid-'90s to compete against the generation of 32-bit consoles of the likes of 3DO, Atari's Jaguar, Nintendo 64 or Sony's PlayStation. It replaced the Mega Drive and meant a substantial change to how home gaming was conceived as the graphics improved greatly, including much more advanced polygons and 3D effects.

Well, if you want to bring back the games of that console, you can do so with Yabause. It's an emulator of Sega Saturn games for Android with a very basic design that simplifies the user experience. Its design is very simple, only offering us two initial options: configuration and load games.

In the configuration, we can adjust different graphical aspects that improve the game's performance in one sense or the other, whilst in the option to load games you'll see the ROMs on your device (no ROMs are included in the emulator).

Once you run the game, adjust the preferences relative to controls and start playing classic titles of the likes of Sonic, Virtua Fighter or Sega Rally.