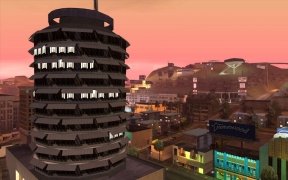 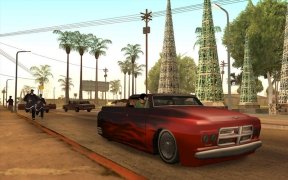 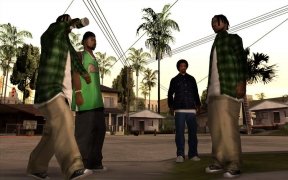 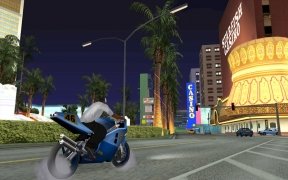 There's no need for us to tell you any more about the legendary GTA San Andreas, right? The game developed by Rockstar brought us to the cities of Los Santos, San Fierro, and Las Venturas that represented the largest towns in California and Nevada also has a version for macOS. It was released about 10 years after the original game was published on PS2, PS3, and PC, and almost at the same time as the versions for smartphone, both the APK file for Android and the iOS version for iPhone and iPad.

As you already know, we'll take on the role of CJ who has returned to his town to investigate and avenge the murder of his mother. Two corrupt cops accuse him of homicide so he'll have to embark on an escape that will lead him into a spiral of action, violence, and crime across the state.

Without any doubt, it's one of the best installments of all the Grand Theft Auto series.

Set in 1992, GTA San Andreas - Grand Theft Auto offers us an action adventure game with missions to be completed in an open world in which the main character has total freedom of movements. Regardless of the above-mentioned missions, we can do whatever we fancy: from stealing cars or mugging people, to going clothes shopping, to the gym or fatting out on a burger.

The game became quite controversial due to the violent situation that any gamer can experience with his character if he wants, as well as other minor details such as racial stereotypes or hanging around with prostitutes.

And when's the San Andreas movie out?

Well, a game based on the movie would be great but for the time being, we'll have to settle for that film starring Dwayne Johnson that's about the aftermath of a huge earthquake in California. So, don't even bother to look for it on FilmAffinity, or any similar site, just download a movie of the likes of Training Day or any other film featuring Ice Cube or Snoop Dogg. They won't disappoint you.

Antony Peel
Rockstar Games
Over a year ago
This year
4.1 GB

GTA 5 - Grand Theft Auto V: The Manual iPhone 5.0.5
Other languages
We use our own and third-party cookies for advertising, session, analytic, and social network purposes. Any action other than blocking them or the express request of the service associated to the cookie in question, involves providing your consent to their use. Check our Privacy Policy.