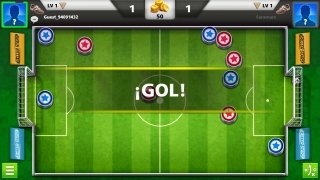 Many of us spent hours on end of our childhood playing bottle-cap football or penny football. Some of us had bottle caps that we used to paint with a felt-tip to differentiate them from the others but that's it. The most artistic users managed to turn their bottle caps into football teams crafted to the maximum extent.

Well, if you were one of those kids that spent all his free time playing this game solo or with friends, you can now bring back all those memories thanks to Soccer Stars, a game developed by Miniclip that brings back the essence of this childish pastime to adapt it to smartphones and tablets.

Football and bottle caps on your Android

It's the mobile version of the bottle-cap game that will allow you to play online against users from all over the world. With a very simple and easy gameplay, you'll just have to flick your caps towards the ball to try to get it into the back of the net. You only need one finger, although you can use two of them, to prepare your shoot, aim, and shoot.

Forget about PES, FIFA, and others: the more basic, the more fun.

In this exciting soccer game, you'll be able to make the most of the following features:

Soccer Stars iPhone 4.6.0
Other languages
We use our own and third-party cookies for advertising, session, analytic, and social network purposes. Any action other than blocking them or the express request of the service associated to the cookie in question, involves providing your consent to their use. Check our Privacy Policy.