This is the official Twitter app for Windows with which you can manage your account from the desktop: tweet, retweet and find out what's trending topic 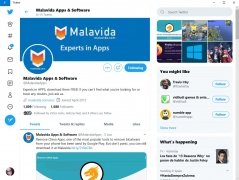 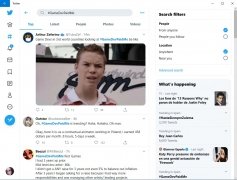 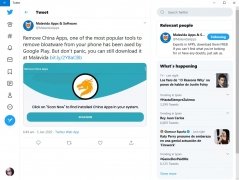 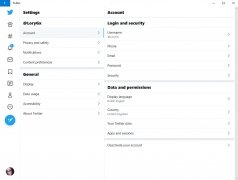 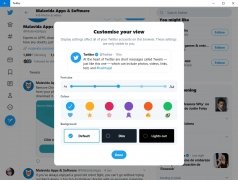 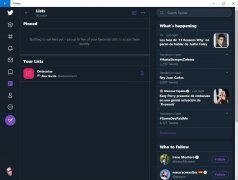 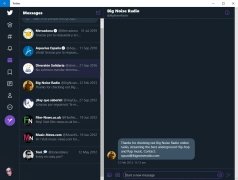 Back in 2006, one of the most popular and influential social networks on the planet first appeared. We're talking about Twitter that, together with Facebook, is the reference for all social activities on the Internet in the West, since Weibo is its equivalent in China.

We thought 140 characters were enough, but the limit is now 280.

The main attractiveness of this platform is precisely its greatest limitation: whilst in forums and other social media you can express yourself with as many words as you want, the guys behind the blue bird limited the length of messages to 140 characters of plain text called tweets. Precisely the length of an SMS message and that has definitely been one of the keys to the success of this social network. However, that length was increased to 280 in 2017.

The official client for Windows

Its popularity is mainly due to its massive use on Android smartphones, iPhone or Blackberry and, to a lesser extent, on web browsers like Chrome or Firefox (that come along with specific extensions that run like built-in clients). Nevertheless, Windows has also received the official application that tries to make the most of the social network's features within Microsoft's environment. You can carry out the usual actions available for any user:

You won't miss any other features and you can use your user profile without problems from your PC's desktop. Furthermore, since it's a specific client you'll find optimized functions that adapt better to the use of your computer, integrating into other applications that can be combined. And since Instagram also has a Windows app, even better. However, use it carefully and with responsibility, you don't want your account shut down...

The first social network to organize its content by means of hashtags.

Although there are other alternative Windows 10 clients like MetroTwit, Tweetz Desktop or TweetDeck that offer us interesting functions, it's true that the latter offer us features that excel the needs of the average user and are more focused on people that have to handle several corporate profiles or accounts.

Sure you don't want to be there? Everyone uses it!

Over time, it has become much more than just a social network; it has become a means of communication that allows us to engage with people whether friends or not, sending direct messages, following their conversations, favoriting and retweeting... And everybody's there: from celebrities to YouTubers, as well as football players and probably even your neighbor. Nevertheless, there are more than 500 million users around the world.