In Among Us we are part of the crew of a spaceship in which there is a saboteur on board. Our mission is to find out who he is before he can kill us 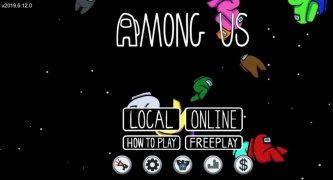 Among Us is a multiplayer sci-fi adventure game. It takes place inside a large spaceship where, among the crew, there is an impostor. Our mission, as well as that of the other players, is to try to find out who he is.

Discover the saboteur among the crew of the spaceship

To identify him, we will have to complete the different tasks prior to the interstellar journey that the ship is about to embark on. These will help us to find out who the possible traitor is who is killing crew members and carrying out sabotage actions. In fact, the best option is to avoid contact with the other players as any of them could be the saboteur.

The Imposter can use sabotage to cause chaos, facilitating assassinations and alibis.

Our character will be controlled by a joystick and we will make him move around inside the ship. To do this, we can use the map to help us, which will indicate the different rooms and places where we can carry out the tasks to be performed. At the same time, we will hold meetings with our colleagues in the crew, where we will vote for those we suspect may be saboteurs.

Although it is a game that came out in 2018, it became a massively followed game since mid-2020 after becoming popular among some Twitch users of some relevance. Moreover, its gameplay allowed its players to socialize at a time when social distance and lockdown were necessary.

A constant update to keep the hype going

Of course, the community's enormous level of engagement has waned over the months. However, it remains on the crest of the wave thanks to its constant improvements and updates.

With its sequel Among Us 2 in full development, the studio decided to backtrack and focus on the improvements to the first version that are working so well. Over time, they have made it possible to include up to 15 players in a single game, added new game maps, developed the Nintendo Switch version (and it is expected to come to other consoles) and added new colors and cosmetics for the characters. In addition, improvements and new features are set to continue with new roles, achievements, and even new game modes such as Hide and Seek.