Beach Buggy Racing 2 is like Mario Kart for Android but featuring cute worms as drivers this time around. Put your foot on the accelerator to overtake them! 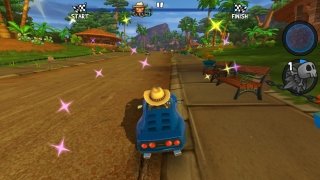 Remember that warfare game called Worms and featuring these cylindrical animals? Now just imagine one of those creatures taking part in a racing game of the likes of Nintendo's Mario Kart. That's the basic idea behind Beach Buggy Racing 2, the new official installment of Beach Buggy Blitz.

Take part in crazy races in the middle of chaotic scenarios full of action and surprises.

Whether we liked its style or not, the first installment of Mario Kart for SNES revolutionized the car racing video game market, which moved on from being serious and formal titles to being fun and crazy competitions in which the winner was probably a cheater. A simple kart could overthrow any Mercedes or Ferrari. This game was so successful that clones of Nintendo's title soon appeared. And amongst these games, we have to point out Beach Buggy Racing, a mad and frenetic racing game in which you can race around 15 different tracks: jungles full of dinosaurs, beaches, swamps, volcanoes, villages... each one with their own features, their shortcuts, and their hidden Easter Eggs.

Put your driving skills to the test in 6 different game modes throughout 15 imaginative 3D tracks.

Just like in Mario Kart, here you can also make use of over 25 power-ups, items that you'll collect through the races and that will help you to protect yourself, use the turbo or cause trouble for your rivals. As you win races and earn rewards, you can purchase new and better vehicles (such as a monster truck or a rocket) and other drivers with their own powers. The other racers are clones of the initial driver but disguised with outfits, masks, etc.

You can also choose between several control methods, points of view, and settings to save the game. And if you're really fond of this game, from the home menu you can order a 3D copy of your driver sitting in his vehicle. Want to play? Just download its APK right now for free.

Looking for cheats and tricks?